Before I say anything about today’s trip, let me just say that I absolutely sucked at taking photos today. Not only was it overcast and the photos I actually did take were blah-looking, I missed some of the best moments of today.  But anyway… 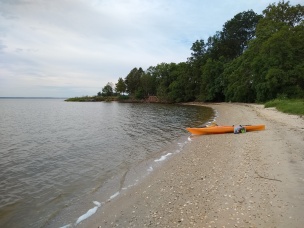 I paddled from Bellevue to Trappe today. The 9.3 mile journey was relaxing for the first 2/3 of the trip.  I crossed the Tred Avon River, enjoyed gazing at the houses in Oxford, and there was just enough of a head wind to be mildly challenging and still enjoyable. I felt like I was getting a workout, but not over-doing it. Until I rounded a point of land and the wind came at me and an annoying angle, MUCH stronger.  For about a mile I really struggled. Not to the point where I had doubts I could do it, but to the point where I literally had to talk myself through it. I find that giving myself a pep-talk (out loud!) actually works. “Girl, you can do this. You’re crushing it. You’ve been in much worse conditions that this.” All that gobbly-goop pep-talk nonsense. It really works. I just make sure nobody is around to hear me 🙂  I did pass one waterman during that difficult stretch that waved to me, I waved back, and he probably had no idea I was struggling. Either that, or he thought I was absolutely insane for paddling alone in windy conditions.

After about a mile, I made a turn into the creek that leads to Trappe Landing. I just paddled out of Trappe Landing last Monday so it was all very familiar. I really like that little creek. There are some beautiful homes, deep water for multiple sailboats moving through, and everyone on passing boats always waves. 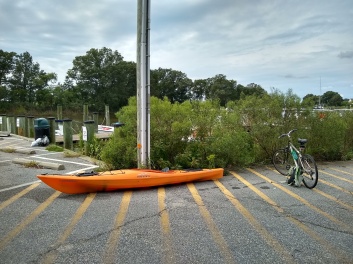 When I finally got to the landing, I began switching out my kayak for my bike (I had locked it to a street light post on the way to Bellevue earlier that morning). I got my kayak locked to the post and was organizing my backpack for the 8+ mile bike ride to Oxford, when that same waterman pulled up in his truck. “How far’d ya row today?” (I silently chuckled at his very Eastern shore accent and the term “row”). I proudly said “just over 9 miles.” He didn’t seem impressed. Did he not understand that that’s pretty good? He just said “huh, I saw you down there around the corner.” Yup, yes you did. What a deep and thoughtful conversation.

I then hopped on my bike and started heading to Oxford. I was very pleasantly surprised at how much I enjoyed this bike ride! There were hills! Actual hills on the Eastern shore. And almost all of them were downhill which was even better. The landscapes were a mix of woods and agricultural, and not as many houses as I expected. I saw a HUGE fox in a field (no photo), 4 turkeys crossed my path at one point (again, no photo, dang it), some cool whooly bear caterpillars, and about 8,423 grasshoppers. The sights and sounds reminded me of the scene at the end of The Shawshank Redemption, when Morgan Freeman gets out of prison and hitchhikes to the hayfield in Buxton. If it had been sunny, I would’ve felt like this was where that scene had been filmed.

I ended my bike ride at the ferry terminal in Oxford. It’s been about 10 years since I rode this ferry, so I was kind of excited to finish out my day with a quick boat ride, on the oldest, family-owned ferry in the country (it got it’s beginning in 1683!). The ferry took me straight to Bellevue where I parked my car several hours earlier. It was kind of bizarre to be on an outdoor boat ride and wearing a mask, which was required. Stupid pandemic! But whatever, it was just about the only time I needed to wear a mask today. That’s what’s so great about doing what I love – kayaking is very socially distant! 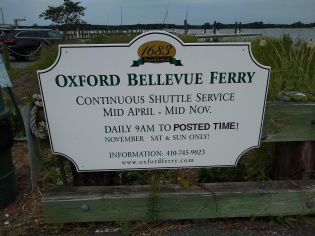 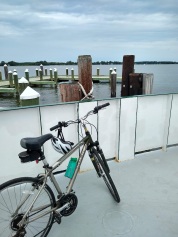 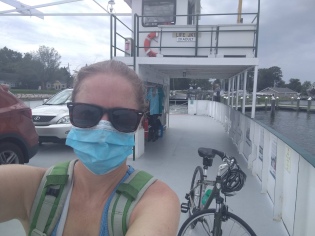 Oh, and I finished off the day with a delicious burrito and iced chai from Rise Up Cambridge! 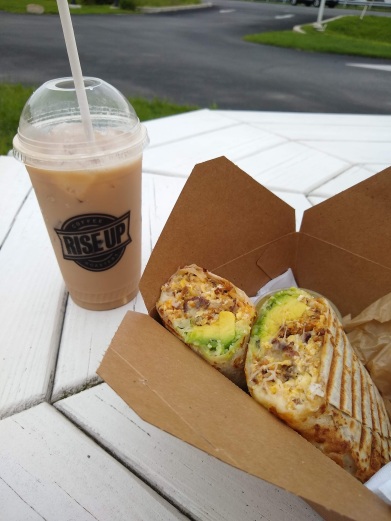