A refreshing, 8.5-mile paddle took me from Prime Hook to Slaughter Beach, DE today.  I knew the Delaware bayshore existed, as well as Prime Hook NWR, and other beachy places like Fowler Beach and Slaughter Beach, but I always underestimated them.  I figured anything north of Lewes wasn’t worth my time.  Today I was proved wrong.  I really don’t know why I’ve never been paddling up in this area before.  It was beautiful scenery, abundant wildlife (well, birds), and an incredibly remote feeling overall.  The perfect weather didn’t hurt either!

The journey started with Brian (and Patrick!) dropping me off along Prime Hook Beach Rd.  The two of them played on the beach while I was paddling.  I launched from the shoulder of the road in VERY shallow water.  There were plenty of gulls, terns, and other shorebirds wading in the water which made me think this trip was going to be a major failure – too shallow and too much kayak-dragging.  But that turned out not to be the case!  There was a nice little channel that was marked with sticks that led me all the water to Fowler Beach Rd.  (GoogleMaps is deceiving.  It appears that I was paddling through marsh, when it was really open water, but VERY shallow.)

I knew there was some kind of spillway at Fowler Beach Rd so I was expecting to portage.  When I got there, the spillway was open and navigable, but the bridge going over the channel was too low and the tide was too high.  I had to portage anyway.  Luckily, 4 women were walking up the road and offered to help me move my kayak to the other side of the road!  I was so thankful for their help!  In return, I pointed out a northern harrier and juvenile black-crowned night herons for them (they seemed new to birding and were very excited). 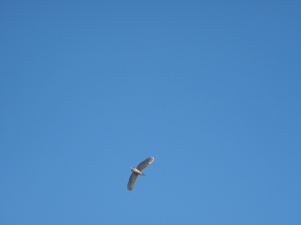 After eating my lunch, I continued on.  One of the really nice things about this paddling trip was that I followed a channel through the marsh the rest of the way.  There was no need to navigate, and no to need pull out my phone w/ the map every 15 minutes.  I could simply paddle and enjoy the trip.  And the feeling of solitude!  I didn’t see or hear any sign of human life for another 2 or 3 miles!  Seriously, if you had just blindfolded me and dropped me off in that creek, I never would have guessed I was in Delaware. 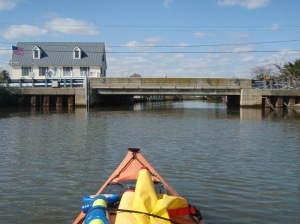 But then I finally did come in contact with human life.  Shirtless, Natural Light-drinking, country music-listening fishermen on the Slaughter Beach Rd bridge.  “Yo, you got a canoe comin’ man” was what the one guy said to the other as I passed underneath.  Yup, a bright orange canoe.

It was about that point when the outgoing tide started to really help me.  The wind, not so much, but overall the last stretch was pretty easy.  Especially when I passed under the Cedar Beach Rd bridge!  The tide was really ripping.  I don’t think I’ve ever moved that fast in my kayak.  I can’t imagine what it would’ve been like to paddle against the tide there – glad I timed it right!  And a minute later, I was at the boat ramp, awaited by hubby and baby!

A couple other photos from the trip… 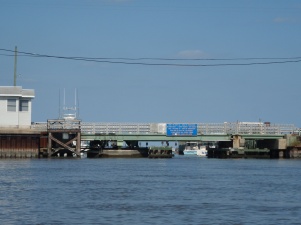