Today, June 30, 2014, I paddled from Gargatha Landing to Pierce Taylor Rd.  This 8.1 mile trip was perfect.  It was the perfect length, far enough away from home that I felt like it was an adventure, perfect weather, good wildlife sightings, almost perfect tides, and perfect timing for Brian to pick me up after he was finished work for the day. 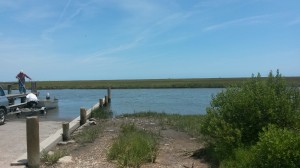 I arrived at Gargatha Landing just as the tide changed and started to go out.  The views from this landing are beautiful; you just look out to the east and see nothing but marsh, a few patches of sandy beach in the distance, and the horizon dotted with a couple fishing/hunting shacks.  As soon as I launched, the tide carried me gracefully out to Metompkin Island.  Along the way I encountered several boaters.  Each one was courteous and slowed down when they saw me, but really, I’d prefer that they didn’t!  I always like a little wake to bounce around in.  By the time the third boater passed me I tried to signal to him to NOT slow down and keep going, but he laughed and threw his hands up in the air, probably saying to himself “what the hell is she doing?”

This is Waldo, the oystercatcher.

As I came around a marsh bend, I finally spotted the sandy beach of Metompkin Island.  I love that first glimpse of beach – you just never know exactly when in the journey you will find it and it’s always exciting to me for some reason.  As I paddled up the final stretch of creek to the island, there were terrapins falling into the water left and right!  Plop, plop, plop, probably heard 50 plops.  I’ve never seen so many terrapins sunning themselves.  And I’ve never seen so many terrapin heads popping up around my boat either!  There must have been hundreds of them!  I also saw probably a dozen oystercatchers on a small shelly island as I was approaching Metompkin.

Once I landed on Metompkin, there were a few families that had come out for the day; picnicking and shelling.  Brian and I had come out here on a small boat about two years ago and I was surprised at how little Metompkin inlet had changed, considering the fact that we’ve had several very strong storms that I thought would have changed the inlet significantly.  I stopped just long enough to snap a few photos, eat some of my lunch, and see tons of terrapin tracks!  Not only was I amazed at the number of terrapins in the water, but I’ve also never seen that many terrapin tracks in one spot either!

Families hanging out on the island

The tidal current was running pretty hard and I was about to launch back in the water and continue on, passed the inlet.  I wasn’t sure what to expect as far as currents went, so I prepared for the worst (capsizing).  I took my phone out of my life jacket pocket, put it in my dry bag, put all my loose things (flip flops, water bottles, etc.) in my dry hatch and carefully launched into the crazy current.  Luckily, paddling passed the inlet wasn’t too bad.  In fact, it was down right easy.  The tide was going out and it just carried me right on towards Assawoman Island.

As I approached Assawoman though, the spot where I thought I would cut west and start paddling in the back bay again was gone!  The only feasible way I could see to paddle into the back bay was to go straight out into the open ocean!  So much for thinking that Metimpkin inlet hadn’t changed much.

This area was drastically different!  Instead of navigating out the inlet and into the ocean, I found an area to portage across (just a narrow strip of sand) and safely put in on the other side, in the back bay.

Once I completed the portage and got back in the water, that’s when the outgoing tide really was against me.  As I came around a marsh corner and started due west, I was really struggling to make any headway.  I was paddling as hard as I possibly could and I was barely moving at all!  It was unreal!  Probably the hardest current I’ve ever paddled against.  To make me even more nervous, I saw a huge sting ray cruise right in front of me, effortlessly swimming through the crazy currents.

Ugh, you all know how I feel about sting rays.  Luckily, the exhausting paddling didn’t last long.  After about 10 minutes I reached a small sandy island to take a break.  I was so sick of paddling that I even portaged straight across the island instead of paddling around it.

At that point the worst was over.  Paddling across the Kegotank Bay (love saying that for some reason) was simple.  The wind just pushed me right along.  The wind continued to help me all through the marsh creeks that were approaching Wallops Island and Pierce Taylor Rd landing.  This stretch of the trip was very relaxing.

No one around but hundreds of terrapins, more willets than I’ve ever seen, and jumping fish!  One little peanut bunker hopping right in my kayak!  Scared the crap out of me.  It jumped right next to my hip and I ended up sitting on the poor guy.  I quickly grabbed him, made him hang tight for a photo, and place him back in the water.  He survived and swam away 🙂 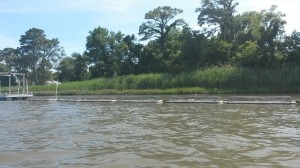 The last interesting thing I saw on this trip was some kind of oyster garden? reef? farm?  Not sure what to call it.  There was a line of probably 25 floats that I’m assuming had oysters or some kind of shellfish in them.  Pretty cool! 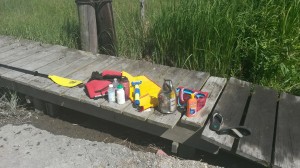 Did I bring enough stuff?

I finished this trip at a public landing on Pierce Taylor Rd.  Not much of a landing; the docks and ramp had definitely seen better days.  As soon as I got out of my kayak, guess who shows up?  My husband – perfect timing.  We hadn’t talked since before I left the house this morning; I had just guessed what time I’d be off the water.  This trip was perfect from start to finish.  Here’s the path I took:

On Sunday, June 1, 2014, I paddled across two of Delaware’s 3 inland bays.  Although I normally have off on Sundays, I had to go to work in the afternoon.  I wanted to make the most of my morning so I decided to get a decent paddle in.  The plan was to launch at Holts Landing State Park and have my coworker, Lowell, pick me up at Tower Rd, the north end of Delaware Seashore State Park to take me back to my car.

I expected the stretch across Indian River Bay to be the most difficult as it is open water and typically filled with boat traffic.  Luckily, for reasons unknown to me, I only encountered one boat!  It was odd because it is pretty much summertime, and the weather was a beautiful day for being out on the water.  But I wasn’t complaining because it was quite peaceful without many boats around.

Indian River bridge in the distance

The nice thing about this trip was that I never had to pull out my phone to help me navigate.  I have been out on these waters so many times for work that I knew exactly where I was and where I had to go.

Distant view of the Life-Saving Station from Lynch Thicket

It was just about 3 miles to get to Massey’s Ditch.  However, instead of going through the ditch, I took a break on an island known as Lynch Thicket before heading east towards Savages Ditch and the marsh islands of Delaware Seashore State Park.

Okay yeah, this post is excruciatingly boring and I apologize.  I really didn’t see anything exciting, just the normal sites I see at work everyday.  Not that I don’t appreciate working in such a beautiful place, I really do appreciate it everyday, but there just weren’t any fun surprises on this trip.  I know where the birds nest, I know where people fish, I know where all the sandy beaches are.

The only somewhat exciting part of this journey was the fact that I finished quickly.  I paddled 7 miles in just 2 hours.  That is pretty speedy for me, particularly since the wind was coming directly at me the whole time.  I finished nearly an hour earlier than expected and since Lowell wasn’t available to pick me up that early, I got a coworker to pick me up and take me to the office.  Lowell was able to bring me all the way back to my car a little later.  Okay, boring post is over.  Here’s my path.  Even the path is a boring, almost straight line.