This past Monday, October 21, I had the day off from work and decided to squeeze in another paddling trip before the weather gets too cold. I typically go first thing in the morning, but because a storm was clearing out of the area, the winds were predicted to be significantly calmer in the afternoon, and out of the NE which was perfect for the area I chose since I’d be headed in a SW direction most of the way.

I unloaded my kayak at the Madison boat ramp and then drove to the Taylor’s Island boat ramp on Slaughter creek. From there I unloaded my bike and started biking back up to Madison. The 5-mile trip was pretty, crossing a few creeks and passing along the boundary of Blackwater NWR. I usually only take photos on the water, but I actually remember to snap a few during the bike ride:

I do apologize though, our waterproof camera is so scratched up and now takes horrible photos. Add a new camera to the Christmas wish list! Or better yet, maybe a GoPro. 🙂

The first stretch of the paddling trip was into the wind, which was expected, so I concentrated on paddling for the first mile or so.  As soon as I turned west to round the bend, the wind should start to be at my back, and eventually get even easier as I continued and headed SW. Or so I thought. As I turned more to the west to round the bend, the wind was even stronger! The wind was blowing directly out of the NW, not the NE as NOAA had predicted! I kept the camera tucked away and kept concentrating on paddling. The water and air temperature were both around 62 degrees and with waves and wind, it was a bit unnerving for about a mile. I was getting splashed more than expected, and worrying about getting too cold (I do worry too much though).

I struggled with the wind out of the NW until I got well into Slaughter creek and had some protection from Taylor’s Island.  At this point, I finally had a chance to take some photos and enjoy the scenery.  I even saw people on the shoreline fishing and enjoying the sunset.  They waved, and I waved back, but I always wonder when I see people (watermen, people on their docks, etc.) what they think of me. Do they think anything? Why is she out here all alone? Where did she come from? Where is she going? How far is she going?  Maybe they don’t think any of those things, but if I were sitting on land, I certainly would be questioning a solo kayaker in a random, remote part of the bay!

I wasn’t able to take any quality photos, not only because our camera is so worn, but also because I was paddling directly into the sun for a good while. 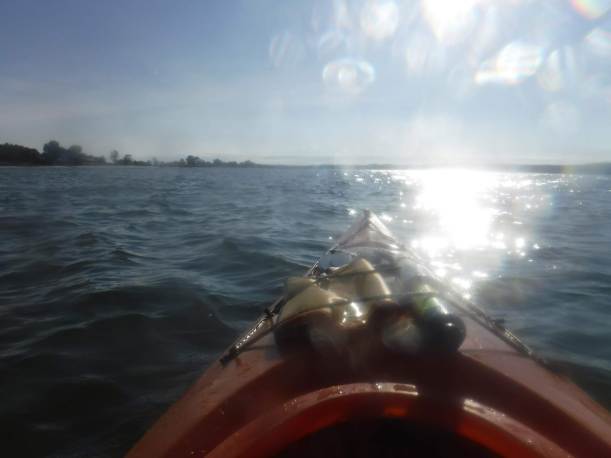 this was my view for a while…

As I neared the ramp on Taylor’s Island, I tried to navigate by memory to where the ramp was actually located. I launched at this same ramp over 7 YEARS ago, so paddle down to Hooper’s Island. I saw the bridge (Route 16) crossing the creek, and I could even make out my car in the distance, but honestly, NOTHING looked familiar. It’s amazing how some launches I haven’t seen in years look so familiar, whereas others have completely left my memory. I guess I’m getting old!

As I paddled up to the ramp, I passed a man that was working on his docked boat, getting it ready for waterfowl season. I again waved, and he waved back, but I still couldn’t help but wonder what he thought of this kayaker – where she came from, and where she was going. 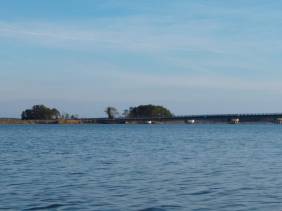 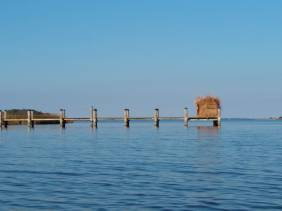