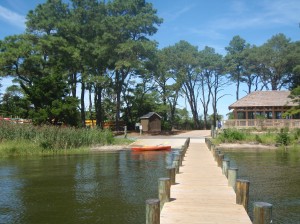 Today, August 25, 2013, I paddled from the MD/DE border to the Ocean City Inlet.  Brian dropped me off at the Bayside Community’s “The Point”, a section of the Bayside development that has not yet been developed, except for a kayak storage area, a screened-in pavilion, a fishing pier, and a boat ramp.  This is so close to the Maryland border that I think I only took about 5 paddle strokes before I was in Maryland waters.

Today’s path was probably the most boat-traffic-heavy stretch that I will encounter.  You’ll notice in the map below that I stayed close to land as much as possible.  However, the first stretch was pretty quiet as I paddled around some marsh islands, away from the boats and jet skis.  Even though the hustle and bustle of Ocean City was not far to the east, the marshes and wooded islands of the Assawoman Bay seemed like a world away.  There were even old hunting shacks and duck blinds (something that I would think to be in only remote areas of Delmarva) that I didn’t expect to see. 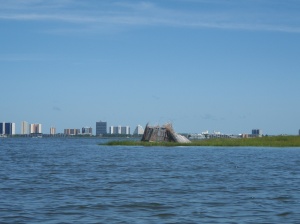 After I passed the undeveloped marsh islands though, I kayaked passed the Lighthouse Sound golf course and several giant mansions; quite a change in scenery.  I then paddled underneath the Route 90 bridge and stopped at the Island of Wight Wildlife Management Area.  I was exhausted and needed a lunch break!

I continued on across the mouth of the St. Martins River.  There was quite a bit of boat traffic so I paddled as fast as possible to cross the channel and get close to land again.  It’s funny though – when I’ve kayaked in Talbot County, all the boaters slow down when they see a kayaker.  Here however, nobody slowed down.  But I’m not sure if I’m upset about that or not.  Although I appreciate the courtesy when someone slows down, I also enjoy paddling through their wakes!

Anyway, my next encounter with boat traffic was an annoying one – jet skis.  Ugh.  I hate them for many reasons.  It appeared that a jet ski rental company had “reserved” part of the bay to bring all of their customers.  It was marked with buoys and there were at least 15-20 jet skis zipping around in a gazillion different directions.  And right in the middle of my intended path.  These people clearly don’t own a jet ski (hence why they are renting) and most likely have no idea what they are doing.  This is why I’m terrified of jet skis.  To keep safe, I paddled around the buoys to stay out of their way, but I was still a little on edge, wondering if some idiot was going to leave the designated area. 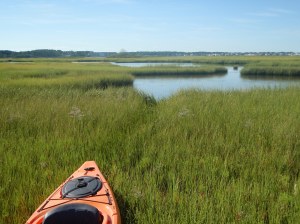 Portage across the marsh

I finally made it passed the jet ski zone and headed through a small marsh creek that was supposed to lead me to the next portion of the bay.  However, I took a wrong turn and just found a dead end.  I didn’t feel like back-tracking so I just decided to portage (it was only about 15 feet, not bad).  It was at this point in my journey that I really started getting tired, but just in time, because the outgoing tide really started to flow and helped to carry me through the rest of the journey. 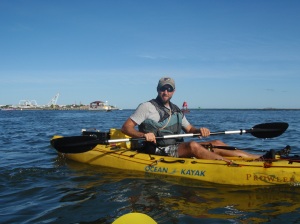 I finished the trip by passing Hooper’s Crab House, underneath the Route 50 bridge, passed Stinky Beach and finally met up with Brian, who I found fishing around the docks, just inside the inlet.  I stayed with him for a few minutes as he fished, but I was exhausted, and all I wanted to do was get out of my kayak!

I then paddled into Sunset Marina and completed my 12.8 mile journey!

AND Brian caught 2 triggerfish for dinner!