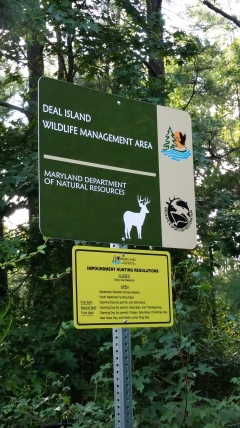 I got to continue my paddling at Deal Island today!  Since Brian took a day to himself last Sunday (tarpon kayak fishing on the ESVA), this weekend is was my turn!  Last month I launch from Dames Quarter and paddle up towards Fishing Bay; this time I launched again from Dames Quarter, but headed down through Chance/Deal Island and finished at a small landing within the Deal Island Wildlife Management Area.

It was a one-way, 9.3 mile paddle, so I packed up my bike for the adventure too.  I dropped my kayak off at the landing in Dames Quarter and then headed down through the Deal Island WMA.  Due to gravel road that I wasn’t expecting, the drive down to the landing seemed to take forever, and then I had to hop on my bike and cycle through the gravel, back to Dames Quarter.  I was lucky I didn’t get a flat tire! 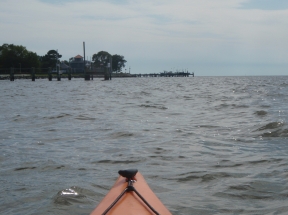 Docks. This was basically my view for 5 miles.

Once I got back to Dames Quarter I unlocked my kayak, locked up my bike, and headed out on the water.  The first half of this trip was passing a whole hell of a lot of private docks and various different kinds of residences; everything from a few giant mansions to a whole bunch of quaint, waterfront cottages.  There were also quite a few people outside – fishing, floating on rafts, drinking, catching some rays – and everyone was so friendly.  I’m not used to seeing so many people when I paddle so it was actually a welcomed change of pace, even though I typically prefer the serene, remote feeling of kayaking.

After what seemed like forever, I pulled into the ditch between Chance and Deal Island.  As I rounded the left turn there were some crazy swells pushing me eastward.  Had I not been by myself in an unknown town, this would’ve been super fun to sort of ride the waves in, but because I was alone, and only half way through my journey, I was pretty nervous for a few minutes! 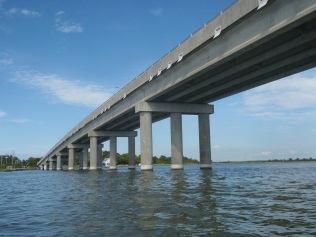 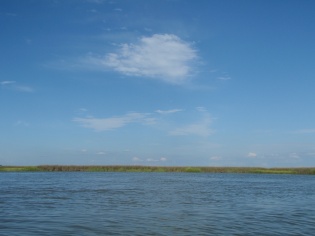 Once I got beyond the breakwater/jetty and the bridge for Route 363, the water was calm and the houses gone.  I was once again, surrounded by nothing but marsh grass – typical for most of my paddling adventures.

From this point until the end, I only saw two boats.  Other than that, felt like the only person for miles.  I could not hear people, cars, or planes, and I couldn’t see any signs of man, except the occasional crab pot buoy.  As I came out of a small creek and entered open water again, there were multiple points of land I could see off in the distance, but I wasn’t sure which one I needed to head around to get to the WMA landing.  This happens all the time and I am constantly pulling out my phone to check Google Earth to find my way.  Almost every time this happens, I make a guess as to where the next turn will be, just based on what I can see and my own sense of direction.  I then check the map to see if I’m right.  I am almost ALWAYS wrong.  And not just wrong, but I always end of having to paddle further than I expected, and always when I’m in the homestretch and exhausted.  NOT THIS TIME.  I win this time, Google Earth.  I checked the map and even though I was still wrong, I didn’t have to paddle nearly as far as I thought I had left!  Yes!!! 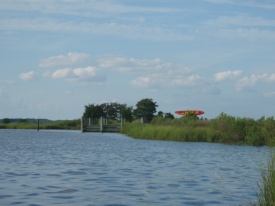 As I rounded the point and headed up to the landing, my arms were killing me.  I’ve certainly paddled longer trips than 9.3 miles, but yikes!  Either I need to paddle more often, or hit the gym on a regular basis again.  My arms and fingers are actually sore as I’m typing this and glad I’m at the end of the post now!