It’s been way too long since I paddled a post-worthy trip, but I definitely logged some miles today.  It would seem that I’d have more miles logged seeing as though my workload decreased and I worked from home for over 2 months, but with a little one at home and Brian and I trying to juggled our schedules, “me-time” was pretty nonexistent during the COVID-19 “quarantine.”

Now that Patrick is back in daycare and I’m working a much more normal schedule, Monday is MY day and I was able to go paddling once again today.

After checking weather and tides, I decided the best spot to paddle was from Slaughter Beach to Big Stone Beach in Delaware. Since it’s pretty much impossible to bike between the two towns without riding on Route 1, I decided to do an out-and-back.  This looked totally doable since I measured the distance to be about 4 miles one way, and 8 miles is totally feasible.

I arrived at the Slaughter Beach boat ramp a little before 9:00.  I estimated the time it would take me, and then texted a coworker to tell her I would meet her at our offices in Dover to pick something up around 11:30-12:00.  The tide was going out so I cruised towards the bay.  As I approached the inlet, I realized there was a jetty.  A REALLY LONG jetty.  A jetty that was a mile long!  A mile in the OPPOSITE direction I needed to go.  I did NOT see this jetty on Google Earth when I measured the night before! 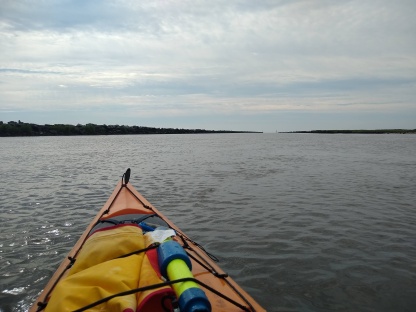 gazing down the loooong inlet

the jetty that i didn’t see on google earth

As I finally got to the end of the jetty and turned north, the wind was against me.  Although this was expected (and I planned on it so it’d be at my back on the way back), it was a little choppier than it would’ve been had the jetty NOT been there, and I had been able to paddle closer to land.  But whatever, I pressed on as it was still pretty early in my trip. 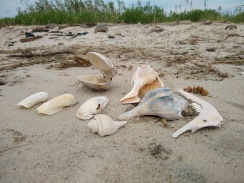 After about a mile or so back towards land, I pulled up on the beach just north of the jetty to see if it was feasible to safely portage my kayak over the jetty.  Good news!  It appeared there was a sandy area to drag my kayak over and launch into the river on the way back – shew!

I got back in my kayak and kept heading north.  It was dead low tide and I had to drag it across a span of mud flat and old marsh peat before I could actually climb in.  Since I was still heading north, I was still going against the wind, and since I haven’t paddled long distances lately, I got fatigued way sooner than I used too (or I’m just getting old). 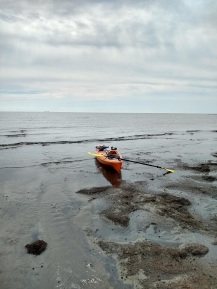 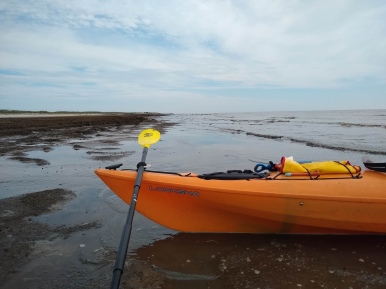 It was pretty cool to see more of the Delaware Bayshore that I haven’t seen before.  I always think “crowded” and “heavy traffic” when I think of Delaware, but that’s just the resort towns.  The bayshore is pretty cool and always takes me by surprise as to how remote it is.  At one point I couldn’t see any man-made structures except a container ship far off in the distance.  I also saw some huge planes circling from the Dover AFB, and several times I temporarily panicked because I thought it was thunder.

Another thing that I found interesting was how shallow the water was, even 50-100 yards from the shore.  I realize it was low tide, but there were spots where the old marsh peat beds extended 100 yards or so out into the bay, making some areas 2 inches deep and completely impassable.  I really had to read the water and the waves to make sure I didn’t run aground.  If I ever paddle this stretch again, I’ll be sure to wait for high tide! 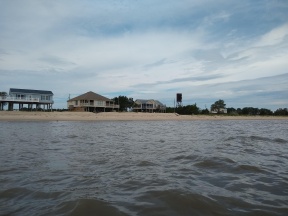 After what felt like forever paddling against the wind, I pulled up onto Big Stone Beach – a tiny town that consisted of maybe 10 house, several of which looked abandoned.  Here’s the path I took (that random straight line is NOT an error – that’s the spot where I paddled along the jetty)!

It was already 11:15 and there was no way in hell I was going to make it back to my car and drive to Dover by 11:30!  I called my coworker to let her know I’d be super late.  I also called a friend that lives nearby to see if she was available to drive me back to my car.  Like I said, I haven’t paddled long distances in awhile, and I already added 2+ miles to my intended trip because of that damn jetty.  Unfortunately she was not working from home and it would have been too complicated for her to figure out how to get away from work and give me a ride in the middle of the day.

So I took a deep breath, pulled up my big girl underpants, hopped back in my kayak, and started heading back south.  Luckily the wind was at my back, and I knew I could portage near the jetty so I wouldn’t have to paddle around it again.  The first half of the trip back south was smooth sailing and the wind really helped.  But about 2 miles down the beach, the wind seemed to die out and I was struggling.  I was only 2.5 miles from the end but I was BEAT.  I honestly started talking to myself and giving myself a pep talk to get through it.  My arms felt like jell-o.

I finally pulled up on the beach next to the jetty back at Slaughter Beach and began to drag my kayak over the sandy part of the jetty.  The tide had gone out even further from before so I had to drag my kayak further.  Holy moly I forgot how exhausting it is to drag a kayak over land!  I almost wished I had paddled around that dang jetty!  Well, almost, but not really.  I even got to a spot that was super muddy, nearly lost my shoes, had to back track a little so I wouldn’t drown in marsh mud, and then I had to drag my kayak across 50 yards of tall marsh grasses.  Not fun. 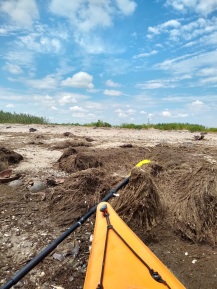 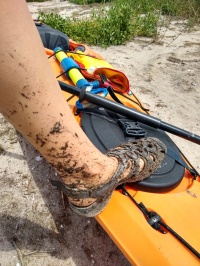 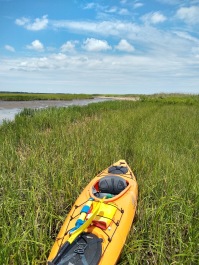 I finally got to a spot that I could safely get back in my kayak and paddled the final stretch back to the boat ramp.  All in all, I paddled 12 miles (instead of the 8 I originally planned on)!  Here’s the path I took to get back – if you zoom in you can see the squiggly line of my uncomfortable portage: