I’m sorry to say I haven’t been in my kayak since OCTOBER. Yikes. However, I’m pleased to report that I am STILL working towards my goal of paddling around the entire peninsula. To be perfectly honest, when I started this 5 years ago, I really didn’t have enough faith in myself that I would stick with it this long. In the beginning of this adventure, I remember writing in a post about how I needed some non-career-oriented goals in my life. Since then I’ve acquired a husband, a new & challenging job, a house, and a BABY (!), but my little kayak blog here will always be something I do for me, and only me.

Enough of the deep, mushy thoughts though. Today I paddled a total of 11.25 miles after being somewhat physically inactive over the last few months. 11.25 miles. MILES. Yeah, I paddled a bit over the last 2 months for work, led a kayak training, led a tour, but never paddled more than 3 miles in one day.

Brian had been encouraging me to take some time for myself and I finally got around to it, so he stayed home with Patrick so I could have some much-needed me time. I was out the door by 6 a.m. (that’s not that early with a 16 month old at home!) and made a bee-line to Somerset County to the tiny town of Dames Quarter. I had spent a while the night before weighing my options and deciding which leg to do based on wind, weather, the fact that I didn’t feel like bringing my bike, drive distance from home, etc. Since Brian was not available to shuttle me, and I didn’t bring my bike, I had to do an “out and back” rather than a one-way trip.  So I took this opportunity to paddle some “connections” between future trips, rather than choosing to paddle ultra-scenic marsh creeks or interesting canals.  The wind was super calm so I decided to get some open water trips over with.  Basically, I covered the mouths of the Wicomico and Nanticoke Rivers:

I never like to paddle more than 2 mile stretches through open water (I try to stay within 1 miles from land at all times, although that’s not always possible).  My plan was to paddle from Dames Quarter (Messick Rd boat ramp), north to Waterview, west to Frog Point, and then go back, retracing my steps (well, strokes). If boat traffic was minimal and the wind stayed relatively calm, my plan was to just paddle straight from Dames Quarter to Frog Point (4+ miles of open water). As soon as I got to the launch and looked out towards my destinations, I couldn’t even SEE Frog Point with the haze, so therefore I paddled straight north to Waterview (across the mouth of the Wicomico).  As I got closer to the land near Waterview, I came across the most adorable little waterfront cabin. It was at least a mile from the next house up, and surrounded by just a few loblolly trees and marsh. Probably no plumbing, no electric, just someone’s sweet getaway, miles away from human connection. I see places like this frequently on my paddling trips, and the more I see, the more I WANT ONE. This dream might have to wait until retirement, but I need to make it happen. 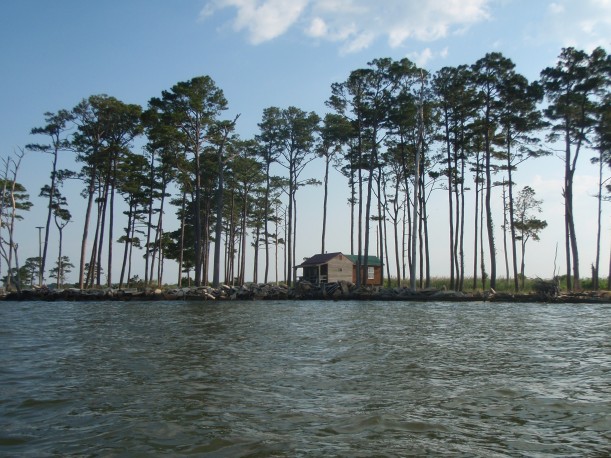 It was at this point that Frog Point was visible.  And it wasn’t nearly as far as I thought it was when I started.  So many times I think my destination is SO FAR AWAY and then I get closer and realize the trees near my destination were far away.  The marsh is so low in elevation that I forget I just can’t see it from a distance.  You’d think I’d get that by now, but it still throws me off every time!

Anyway, I paddled close to shore for a short distance before heading west across more open water (the mouth of the Nanticoke).  I only saw one waterman today. And whenever I DO see watermen, I wonder what they think when they see me out in the middle of nowhere by myself. I’d like to think they see me and think “wow, good for her, not afraid of a little adventure” but I’m sure it’s more like “stupid kayaker, out here alone, miles away from civilization, doesn’t know nothin’ bout the water, getting in our way.”  I suppose I’ll never know.

Once I reached Frog Point it was like Alfred Hitchcock’s “The Dragonflies”. Good god they were everywhere. I had dozens land on my kayak, my arms, my paddle. Blugh. Pretty harmless insects but that many gives me the willies!  I couldn’t even get right up next to the marsh because there were THOUSANDS of them covering the grasses and shrubs.

I quickly turned around to head back.  Given that the wind was light and blowing from the NW, and I had only encountered one boat (the waterman), I decided to paddle straight back to Dames Quarter, rather than going back by way of Waterview. No boats in sight, wind at my back. Not bad. I got about 2-3 miles across the open water, when off in the distance, out of the Wicomico river, comes a HUGE barge, being pushed by a HUGE tug boat. WHAT?? I didn’t know vessels HALF that size could back it up the Wicomico! Like seriously, WHAT?! It appeared to be moving pretty slowly, but remembering back to my days running boats out of Tilghman, large ships ALWAYS look like they’re barely moving and that all of a sudden they’re like, right there. About to eat you.  I realized I was like IN THE MIDDLE of the channel so I hauled ass to cross the channel and get far, far away from the channel.  I finally got to a distance away from the channel that I thought was safe so I stopped and glanced behind me.  The barge had stopped and the tug was circling it?  Huh? What this some kind of weird training?  I guess they gotta train new captains somewhere.  I paddled a little further and then glanced behind me again to find the tug now actually tugging (towing) the barge. Interesting. Not only was I flabbergasted that a giant vessel would travel the Wicomico, but it was pretty darn cool to see it maneuvering. Made me miss my days working on the water! 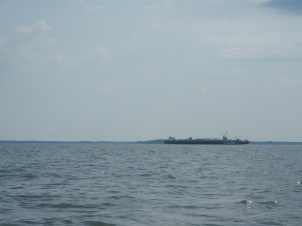 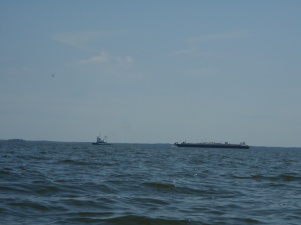 And just like that, 11.25 miles later, I was back at the landing.  Too bad only 6 of the 11.25 miles I paddled actually count towards my overall goal, but not a bad workout! 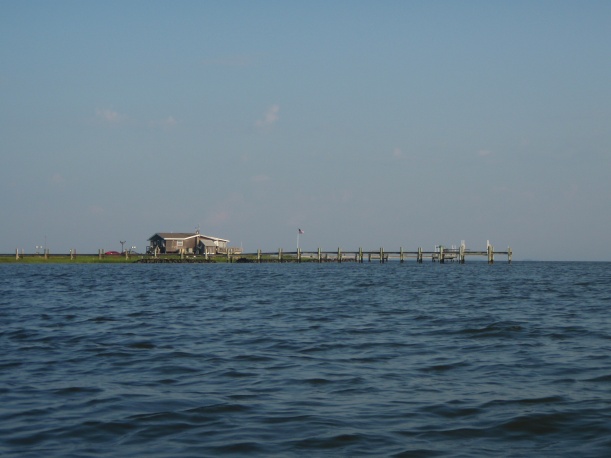 Happy 4th! (the flag was much more notable in person)