Today the weather was looking a bit iffy on the lower shore, so I decided to head up to the mid-shore to paddle. The whole day was a little bit of a trip down memory lane as I spent 2.5 years living in Talbot County back in 2010-2012.  As this was another one-way paddle, I started by dropping my bike off at the boat ramp in Bellevue, which is also the ferry terminal for the Oxford ferry.  I then drove to the boat ramp in Neavitt which was 17 miles away – 17 miles I was planning on biking after I was finished paddling.  I was already dreading it since I struggled so much on the 10.5 mile bike ride on Deal Island!

Before I even launched, I had the most notable wildlife encounter of the trip – fish! I was greeted by hundreds of some kind of minnow; maybe mummichogs? Peanut bunker? Mullet? I couldn’t quite tell, but they were swimming in the coolest spiral patterns. I took some video – if you squint, you might be able to see them!

The water was like glass which made for very enjoyable paddling. The most frustrating thing for the first 3 miles of the trip though, was boat traffic! Watermen traffic. It’s one thing to deal with the pleasure boats – people traveling from here to there. But work boats are a different story. Their direction and turns are super unpredictable as they are either emptying a line of crab pots, or heading from end to end of trot lines. And most of the time they aren’t paying much attention for lone kayakers, and steering from the stern, rather than at the helm.  My blood pressure always goes up a little when there are work boats near me. Not sure if it’s because I’m stressed they’re going to run me over, or if I’m just frustrated. I get it though – they have a job to do, and I’m the foreigner in their everyday world. 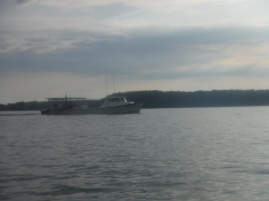 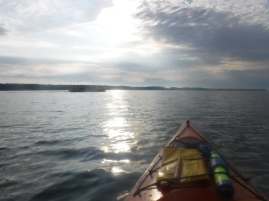 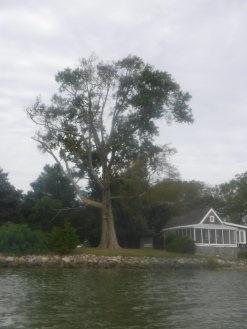 Once I crossed Broad Creek, the boat traffic died down and I was able to realize the drastic change in scenery on this trip, in contrast to the recent trips I’ve taken. Trees! Wooded shorelines with big oaks, maples, sweet gum. Yeah, many of the waterfront properties had hardened shorelines full of rip rap, damaging the surrounding ecosystem, but it was so nice not to be staring at marsh grasses the whole time!

Another change in scenery were the houses. When you travel up and down Route 33, you don’t realize the number of giant mansions that are in the area because they are all set way off the road so they can be waterfront. Some of these homes are beautiful, and some are just downright ridiculous. 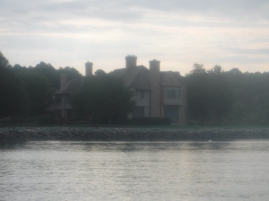 As I rounded the last point and headed towards Bellevue, I was greeted by the Oxford ferry.  I will likely take this ferry next time I head to this landing to paddle (I’ll probably go from Bellevue, to Oxford, to somewhere in Cambridge).

After a quick snack and locking up my kayak, I hopped on my bike to start the 17 mile journey. I took it slow and steady as to not wear myself out.  It was still overcast and very calm winds, so before I knew it, I was in St. Michaels! I even rode the little 1.3-mile bike path on the west side of town.

The wind was still at my back as I headed beyond St. Michaels and down towards Neavitt.  The last 3-4 miles were definitely tough, but by the time I arrive back at Neavitt landing, I was still not nearly as beat as I was when I was biking at Deal Island. Thank goodness! Maybe I’m not as out of shape as I thought I was!

Another 7.8 miles in the books! Here’s the paddling route I took today.