Back in the saddle for the 2019 paddling season! It’s been way too long and I’m determined to put in some serious mileage this year. The last few years have been tough to find enough “me” time to paddle with a little one at home, but I’m feeling pretty motivated. I have a ton of leave that I need to use up so I plan to take some time off in the fall to dedicate to paddling Delmarva!

Paddling the seaside of VA can come with some challenges, particularly tide – more so than MD or the Chesapeake side.  I’m not really sure why, but I’m going to guess that tides can be stronger because there are more inlets, and there are some big expanses of water that are too shallow to paddle at lower tides.  But today both the wind and the tide were on my side.  The wind was coming out of the SW at about 9 mph and it was high tide (or close to it) for most of the paddle today.  It really was perfect for paddling this stretch.

I always spend a good bit of time the night before a paddle deciding where and when and how I’m going to accomplish it.  I chose not to include my bike in this adventure because I knew I had to pick up Patrick from daycare and therefore I didn’t feel like removing his car seat and then reinstalling it at the end of the day (can’t fit my bike otherwise).  The distance between Quinby, VA and Wachapreague on land is about 4.3 miles so I figured I could run/walk back to my car after paddling the 5-6 miles on the water.

I launched at the public wharf in Quinby a little before 8 a.m. (got up at 5:15 to have enough time to eat breakfast and drive down to VA).  Quinby is a TINY little town right on the water.  I don’t think there’s anything there except some houses, a public boat ramp, and a post office.  The views from the town though are spectacular – gazing across Upshur Bay at Parramore Island – the folks that live on the water here are truly a world away from everything.

When I paddled out into the bay, I was pretty surprised at how windy and choppy it felt and I got a little nervous that this was going to be an unexpectedly challenging trip.  However the wind was out of the south and I was headed north so no big deal.  At times it was fun to sort of ride the little waves as they gently pushed me northward. 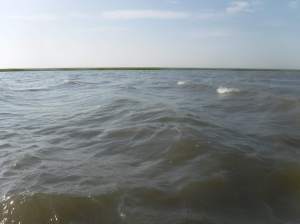 When I’m planning a paddling trip, I typically spend a good amount of time on Google Earth and referencing various counties’ public boat ramp maps.  This time I used the VA Seaside Water Trail website for advice which is a very thorough and useful tool if you ever plan to paddle this area.  It indicated that there was a long “expert level” kayak route between the two towns, with another less-advanced and shorter route through the marsh creeks that would only be accessible at high tide.  Lucky for me, it was high tide and I was able to take that creek.

On every trip I almost always reference my GPS tracker app multiple times to make sure I am on my intended path.  Today that was extremely challenging.  When viewing my phone outdoors, the satellite mode is pretty hard to see so I usually rely on the “schematic” google map (the typical google maps colors you’re used to seeing).  Most of the marsh creeks behind Parramore Island were not identified in the schematic mode so I had a really difficult time finding the right creek to take, but after some hunching down in my kayak and blocking the sun with my hat, I was able to see the path on the satellite layer.

Can you see the fiddler crabs?

Once I got into the marsh creek the wind was not really affecting me anymore and navigation was super easy (just follow the creek!) and I was able to relax a bit.  This stretch of the trip was so peaceful.  I felt miles and miles away from anything and anyone.  I couldn’t hear anything except my paddle hitting the water and the occasional clapper rail.  I saw lots of small terrapins (every time I rounded a bend a few plopped into the water from sunning themselves on the marsh banks) and bajillions of fiddler crabs!  So. Many. Fiddlers. More than I’ve ever seen anywhere.  And they weren’t shy either – I swear some of them were waving as I passed on by!  I’m used to fiddler crabs scurrying quickly into their holes when you get too close to them.

When I got out of the creek, I crossed Bradford Bay (saw a bald eagle chillin’ in the marsh – see above) and approached the town of Wachapreague.  As I neared the final stretch, two Coast Guard vessels passed me – first time I’ve encountered Coasties on any of my paddling trips! 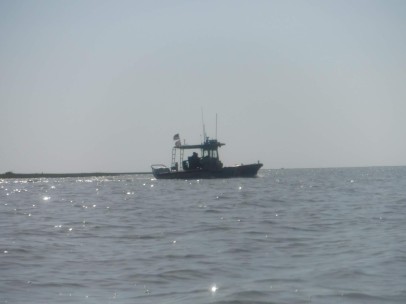 I ended the trip at a boat ramp that I haven’t seen in 6 years!  The ramp is free and is on the north side of the Island House restaurant.  Brian and I launched from that ramp back in 2013 when we went kayak camping on Cedar Island.  I can’t believe I have stuck with my goal for over 7 years – started this journey in June of 2012 and I’m still going (sort of) strong!

Now you probably think that’s the end of my adventure, but NOPE!  After I locked my kayak under the stairs to the Island House restaurant, my plan was to run back to my car, 4.3 miles away.

Oh dear.  It was like 90 degrees and I was tired from paddling.  It was the longest damn 4.3 miles of my life!  I ran portions of it, but dang, I am terrible at running in the summer.  Honestly, I’m terrible at WALKING in the summer.  I have no tolerance for any kind of exercise in the heat, unless it’s paddling!

The advantage to walking back instead of biking was that I took in more of the sights.  Check it out.  Cute kayak rental place, a guy driving through town on a lawn mower, a few cute little churches, a guy that mounts shipwreck pieces in his front yard, a fixer upper with a view, an abandoned church, farmland with a view, and finally my return to Quinby Wharf! 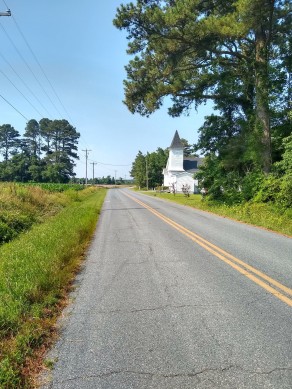 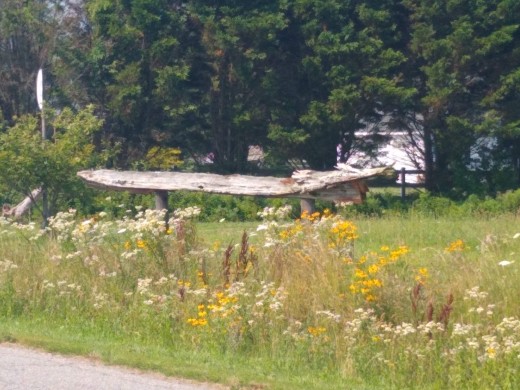 some dude had 2 shipwreck pieces mounted in his yard 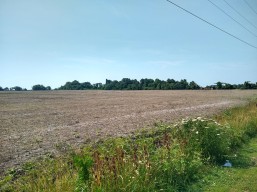 farmland steps from the water 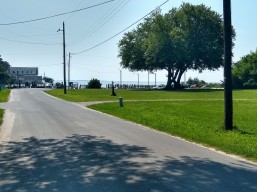 shew, made it back to Quinby wharf!