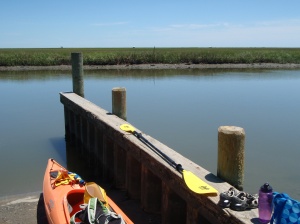 Mud.  Mud and tears would be the two words to describe this trip.  I launched at Gargatha Landing with a 9 mile trip ahead of me, which at my normal rate, would take me 3 hours to complete.  The first 2-3 miles of this trip were lovely.  All kinds of birds (willets, oystercatchers, rails, skimmers, terns).  And TON of turtles.  It was RAINING turtles in many spots. 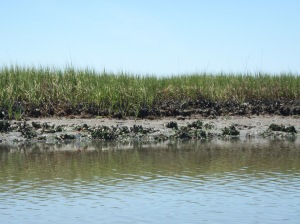 i swear there’s a rail in this photo

I guess I was in such a remote spot that the turtles weren’t used to many people around.  Every bend I came around, I saw a whole pack of turtles running and plopping into the water.  Made me laugh every time. 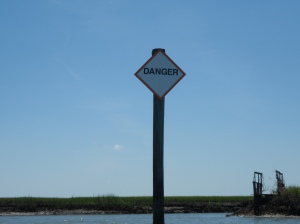 As I came around another bend, I saw a channel marker in the distance.  However, as I got closer, I realized it was white with an orange border, which usually means some kind of obstruction or danger ahead.  As I got close enough to read it, sure enough, the sign said “DANGER”.  And that was it?  Well what kind of danger?  Submerged electric line?  Unexploded ordinances?  Alligator pit?  Terrorists?

I knew Brian was familiar with this area from work, so I called him to see if he knew.  Turns out a storm had overwashed part of Metompkin Island and deposited a bunch of sand in the creek, blocking navigation.  No big deal for me though; it allowed me to pull up onto a sandy spot, get out, stretch, and walk the beach for a few minutes.  Then I only needed to drag my kayak 10o yards or so to continue paddling down the creek. 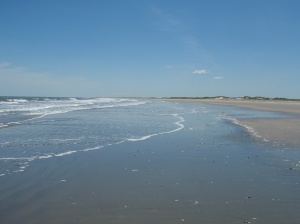 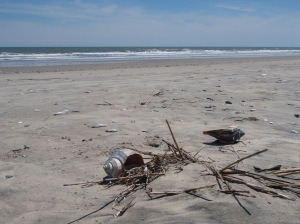 Yeah…. I don’t even know how to start explaining the next hour of this trip.  It was so bad.  So, so bad.  First, I hate dragging my kayak because it’s exhausting.  Then the sand turned into mud as I got closer to the creek.  My feet started sticking, but shoes were covered in mud.  Then the mud got deeper.  My right shoe slipped off as I was almost knee deep in mud.  Luckily I was able to grab it out of the mud and throw it on my kayak.  Every step was a battle in itself, let along dragging my kayak behind me.  Then the mud got deeper. 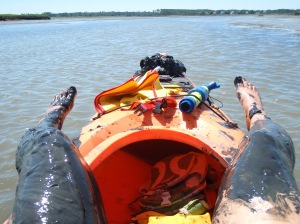 omg my legs are black!

My left shoe got sucked off as I was in mud to just above my knee.  Somehow I slid my hand down a good foot into the mud and salvaged my other shoe.  Then the mud got deeper.  Yup, up my entire thigh.  Make that both thighs.  In the sheer panic that I was going to drown in mud, my adrenaline must have given me the power to hoist myself into my kayak (not my legs though, I just sort of hung them off the sides so my whole kayak didn’t get covered in mud.  Holy crap.  What do I do now?  I’m stuck on a mud flat in 1 inch of water.  I’m not moving.  I can’t get out and walk or I’ll be swallowed up my the marsh mud for good.  Wait for the tide to come in?  Ugh, that’ll take hours.  I think at this point I shed a few tears in disbelief of my situation and how I would ever get out of it.  That’s when I prayed for a solution.  And solution I got!  I started to mud paddle and it kind of worked.  A few paddles on the left, a few paddles on the right, and I had moved a few feet!  Another few feet later I was in maybe 2 inches of water.  And then the wind picked up and pushed me even further!  Slow and steady, and an hour later, I was back to paddling in 6+ inches of water again.  Whew!  What an ordeal!  I was physically and emotionally exhausted, but overjoyed to be in navigable water again!

My original plan was to paddle along the back side of Metompkin as I headed south, but I felt I needed to get closer to the mainland, away from the mud flats and in deeper water.  I don’t remember much about the next 3 miles.  It was typical paddling, across open water.  I do remember seeing 2 HUGE sting rays though.  And of course I was crossing my fingers that I didn’t have to get out and walk anymore! 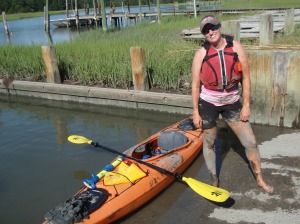 The last stretch before I got into Folly creek was killer.  The tide and the wind were driving against me.  I was using every once of energy in me to get through it and barely felt like I was moving.  I shed more tears during this 200 yard stretch.  It was so bad.  As I finally rounded the corner of the creek, the tide and wind were finally both on my side and it was smooth sailing for the last half mile back to the landing.  As soon as I pulled up to the boat ramp, Brian was there laughing at me: “Did you get attacked by a mud monster?”  And then a lady on the dock saw me and just said “Bless your little heart. At least you are safe!”  Yes, I am finally safe and on dry land!  And UPDATE: I was 7 weeks pregnant at the time! I think I deserve a medal or something. 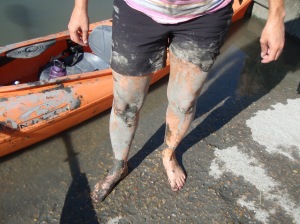 photo doesn’t do a justice. once mud dries, it dries a like gray. it was black earlier!

I felt for sure that I paddled more than 9 miles (like 11 or 12), but the total mileage was only 9.7 miles.  Ugh.  So exhausted.  And it took me 90 minutes longer than I expected!  But one great thing I got from this trip was connecting a few dots!  Now I’ve paddled a solid line, all the way from Prime Hook, Delaware down to Wachapreague, VA.

Here’s the path I took today:

One thought on “Gargatha Landing to Folly Creek”