The weather was perfect for kayaking on Sunday, August 12 for a long paddle so I decided it was time to cover some serious mileage. Brian dropped me off at the public boat ramp in Taylor’s Island around 11:30 and he planned to meet me at the Smithville landing a few miles away. 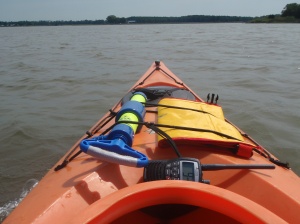 Since my last solo trip I decided I needed more safety equipment so I purchased a paddle float, bilge pump, and a whistle. Brian bought me a marine VHF radio too.  Now that we both have radios, we can keep in contact, even when there’s no cell service. I felt like a pretty hard core paddler with all that stuff strapped to my kayak! 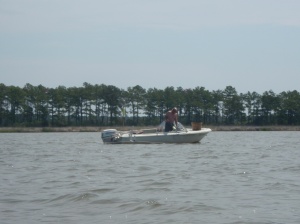 I started out by heading south. The wind and the tide were with me so I was able to paddle at a leisurely pace.  The first and only person I encountered on this whole trip was right after I went underneath the Taylor’s Island bridge.  This guy was spending his day trot-lining – looked like he had almost a bushel of crabs.  I think I creeped him out when I took this photo, probably thinking I was some stupid tourist, but I wasn’t quite in earshot to say hello.

For about 90% of this trip, I was surrounded by nothing but marsh and trees.  Not a person, boat, house, not even a power line in sight.  However, when I say nothing was in sight but marsh and trees, I mean it.  The wildlife sightings were at a minimum.  I saw a few terrapin heads pop up, 3 bald eagles, and the occasional great blue heron scaring the crap out of me with their obnoxious squawking.  The absence of wildlife was not what I expected, paddling in such remote habitat, and being in close proximity to the Taylor’s Island Wildlife Management Area and Blackwater National Wildlife Refuge. 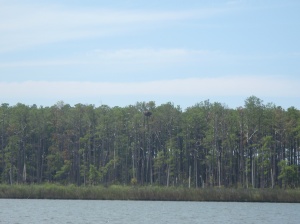 I did see this bald eagle nest though – kinda cool.

About a half hour into my journey, my radio pipes up saying “Euryhaline, this is Banana Hammock, do you read me?”   Yes, Brian named his kayak the banana hammock.  So if you’re ever cruising around Delmarva, turn to channel 9, you might catch our stupid conversations. 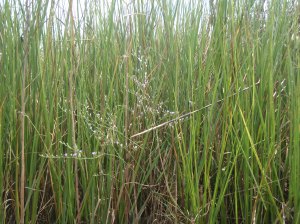 Here is one of the sightings that I got most excited about – sea lavender.  This native plant commonly grows in marshes, but I think it is more commonly seen closer to the coast.  I hadn’t seen sea lavender since I worked at Delaware Seashore State Park back in 2009. 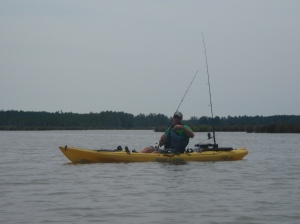 As I rounded one of the last bends before reaching the Smithville landing, and just over an hour of paddling alone, I spotted this guy!  No luck with the fishing yet so he paddled to the landing with me.  After eating a quick lunch I decided I was up for more so I took off again, still heading south.  Brian said he would meet me at the next bridge (MD-335).  It’s a damn good thing I have Google Earth on my phone or I would have never found that bridge.  The water trails through the marsh islands basically make up a giant maze and when you’re sitting low in a kayak, it is almost impossible to navigate unfamiliar territory.

Maybe 45 minutes later I spotted Brian standing next to the bridge, ready to pull me out.  Well, I wasn’t ready.  The tide and the wind were still perfect so he agreed to meet me at the first bridge going to Hooper’s Island. 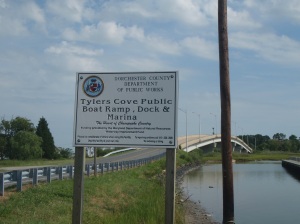 Oh em gee.  I hate open water.  Seriously.  Even though the tide and the wind were all in my favor, I felt like I was going nowhere!  Not being close to the shoreline and easily seeing your progress, it can be mentally exhausting, leading to physically exhausting.  I had to count my strokes and force myself to do 24 strokes before I rested again.  This last 2 mile stretch (or thereabouts) was by far the worst part of today’s trip.  When I reached the bridge by Tyler’s Cover boat ramp, I felt like my arms were going to fall off.

Brian spent another half hour or so catching spot (to use at bait later) while I relaxed and admired the distance I covered – 13.42 miles in 3 hours and 51 minutes.  Check out my path:

And I finished the day with a well deserved strawberry shortcake ice cream bar! 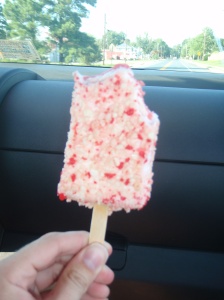